The workshop is being held at Reflecs3, Bois de Rose and yesterday’s opening session was attended by the principal secretary for Social Affairs, Linda William Melanie who also serves as chairperson of the National Coordinating Committee Against Trafficking in Person.

Participants include representatives from Foreign Affairs, the Judiciary, the Police Force, Customs, among others.

The purpose of this scenario-based simulation exercise is to assess the functionality of the Prohibition of Trafficking in Persons Act as well as identify potential areas of enhancing national coordination and cooperation on identifying, investigating and prosecuting TIP cases.

It will provide participants with the opportunity to share experiences, sharpen skills, enrich knowledge and assess current operating procedures especially in investigation and prosecution of TIP perpetrators.

Another aim of the workshop is also to strengthen the coordination between stakeholders in the criminal justice system on matters of trafficking in persons to ensure successful outcome.

The training follows a request made to UNODC early 2020, followed by further consultation held in September 2020 and February 2021 whereby the groundwork was laid for the training to become a reality.

In her remarks at the official launch of the workshop, PS William Melanie said that trafficking in persons is a heinous crime that affects millions of people across the world.

“It is a scourge that permeates indiscriminately through borders, all ages, genders and nationalities. It is an evil that leaves a trail of victims who have been reduced to commodities. Alongside illicit drugs and arms trafficking, the exploitation and trade of human beings is one of the most lucrative and grotesque industries of our world,” she said.

“Seychelles does not and cannot remain isolated from the world’s problems. With our permeable shores, high influx of tourists, and significant migrant population to support our economic development, we must not underestimate the risk and potential for this crime to fester in our country, as a source, transit or destination for victims of human trafficking. We must recognise the risk of increased possibility of child sexual trafficking through the social media that has become a lucrative source of attracting unsuspected child victims,” she said.

PS William Melanie continued by noting that Seychelles is a party to various international and regional legal instruments aimed at combating trafficking in persons, including the UN Convention against Transnational Organised Crime (2000), Protocol to Prevent, Suppress and Punish Trafficking in Persons Especially Women and Children, supplementing the United Nations Convention against Transnational Organised Crime (2000) among others.

“It is in this view and in compliance with international obligations that Seychelles enacted the Prohibition against Trafficking in Persons Act, 2014 under which we have managed to successfully prosecute several cases of trafficking in persons since 2016. However, enacting legislation alone does not suffice. There is a need to test the effectiveness of this legislation and in so doing continuously enhance the capacity of law-enforcement officers, prosecutors and the judiciary. The Seychelles Criminal Justice System has awakened to the fact that there is a risk of increased possible child sexual trafficking offences through the far-reaching arm of social media as a new source of attracting unsuspected child victims. Two recent convictions of perpetrators of child sexual trafficking through the use of social media were possible because of provisions of the Prohibition against Trafficking in Persons Act,” the PS noted.

“The fight against trafficking in persons and smuggling of migrants requires a multi-jurisdictional and transnational approach,” he said.

He highlighted the importance of understanding the significance of strong regional and international cooperation in preventing, suppressing and prosecuting human trafficking and migrant smuggling with due regard for the need to protect and assist victims of trafficking as well as the need to respect and protect the rights of migrants.

He added that it’s important to know where to focus education efforts, where to build networks, collaborative partnerships and campaigns to develop and distribute accurate informational materials about human trafficking.

“The impact of accurate awareness meets our ultimate goal: ensuring that survivors have access to services designed around their actual needs, not around what sensationalised narratives emphasise,” he added.

Following the first part of the workshop, PS Melanie told the press that human trafficking in Seychelles isn’t alarming but we still need to put the proper structures in place so that when it does happen it can be detected early.

She also added that human trafficking doesn’t only concern migrant workers but it also applies to under age children as well who are often exploited by others.

PS William Melanie also highlighted that this workshop will also help delegates analyse the legislation conserning human trafficking to see if there are any discrepancies in the law.

She ended by thanking UNODC on behalf of the government for its long-term engagement and commitment in assisting Seychelles in developing its capacity to combat transnational organised crime and crimes of trafficking in persons.

This UNODC regional project is funded by the US Department of State’s Office to Monitor and Combat Trafficking in Persons. It is implemented within the framework of the UNODC Regional Programme for Eastern Africa (2016-2021) and its regional Countering Transnational Organised Crime and Illicit Trafficking Programme.

The project has two primary objectives:

(1)      To enhance the legal, policy and coordination frameworks of member States in Eastern Africa to prevent, suppress and prosecute trafficking in persons, while effectively protecting and supporting victims of trafficking; and 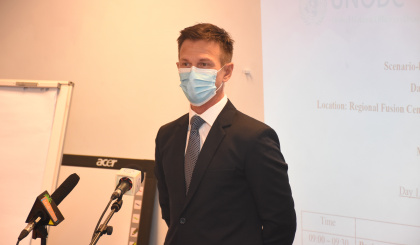 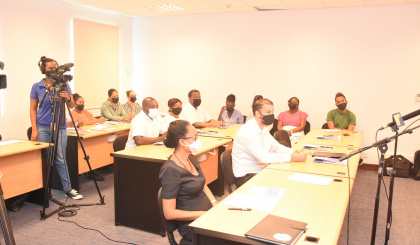 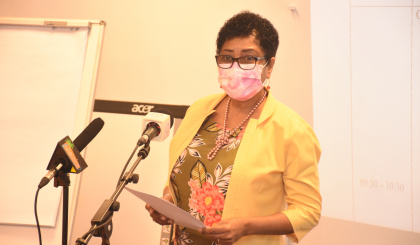 PS William Melanie speaking at the launch of the workshop (Photo: Jude Morel)

The Seychelles Immigration maintains an effective Border Control, Assess claims of citizenship of Seychelles and reponsible for the issuance of passports to citizens of Seychelles.

Living and working in Seychelles

All expatriate workers in Seychelles require a Gainful Occupation Permit (GOP). Without this, non-Seychellois are not permitted to work full time or part time, paid or unpaid.
More